A film with no spoken dialogue, just follows the music and lyrics of Benjamin Britten's "War Requiem, which include WWI soldier poet Wilfred Owen's poems reflecting the war's horrors. It shows the story of an Englishman soldier (Wilfred Owen) and a nurse (his bride) during World War I. It also includes actual footage of contemporary wars (WWII, Vietnam, Angola, etc.)

Jarman to a T: Brilliant, atmospheric, imagistic, eccentric, and sometimes homo-erotic. An incredible blend of one of the great 20th century musical works on (or rather against) war and the cinematographic art.

I've seen this film twice now. Some of the comments given by other reviewers seem to miss the point of the film- it is dark and sometimes jarring. Jarman uses historic footage, color and colorization as a technique to refocus the viewer's eyes and thoughts. Jarman is not interested in narrative so much as building a series of images that take the poem and music to a new place of understanding.

Perhaps this film is not for everyone- but then I would love to tie every politician to his or her chair and force its viewing. 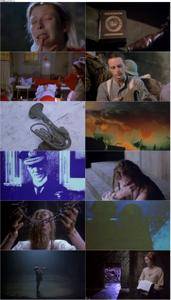