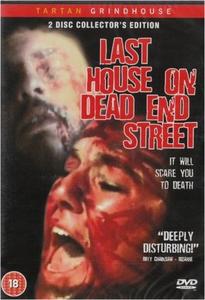 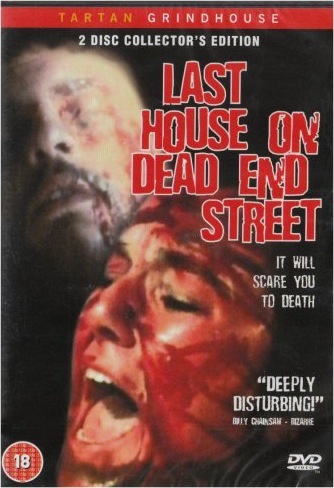 After serving 1 year in jail a guy decides to repay the society by making some snuff-films. Four people are captured, tied up and held as material for his project. One by one they are killed in scenes for the camera. A woman has her limbs sawn of while he keep her concious. Another victim is killed by a power drill.

Every fan of horror cinema enjoys searching the back recesses of their local video store looking for that those obscure little gems that they can call their own. "Last House on Dead End Street" is one of my favorite flicks, a movie so obscure, I've only been able to find it at one video store.

This bargain-basement production has a small-time director of homemade porno films discovering that his distributor no longer wants to buy his movies, claiming that they are boring. Desperate to find something new, he discovers a brutal series of "snuff" films made by an ex-convict and his demented friends. Realizing that actual death on tape could be the next big thing, but unwilling to make a film himself, he steals some the convict's movies and takes the credit for himself. When the true filmmakers discover what happened, they kidnap both the thieving director, the distributor, and their respective wives for an evening of torture and humilation back at their wharehouse hideout, all of it to be captured on tape for another "snuff" film.

Sure this is disgusting with all manner of nasty acts committed by sleazy characters. But what makes this memorable in my book is its suprising sense of humor. This film about snuff directors is actually designed to look like a snuff film itself, with credits that consist entirely of pseudonyms, grainy handheld camera work, and even a movie box that is tailored to look homemade. It's that creepy attitude that, along with the look of the film, is something that just can't be duplicated. Happy hunting!