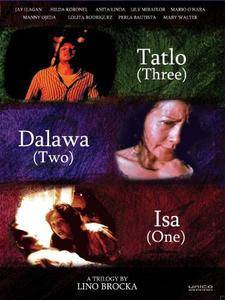 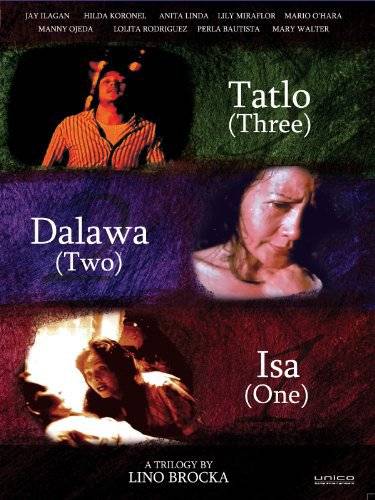 Tatlo, Dalawa, Isa" or in english "Three, Two, One" is a compilation of three intimate stories directed by Filipino cinema legend Lino Brocka. The films show the perseverance of hope despite a sense of despair. Featuring a drug addict, an abandoned daughter and a repressed catholic.

TATLO, DALAWA, ISA REVIEW This is a compelling 3 movies-in-1 feature, with established and (then) emerging actors.

Anita Linda's tour de force performance in the 2nd mini-movie reflects her emotions that she has bottled up for years. She portrays a Filipino woman whose US soldier lover left her after the end of WWII in Manila. Seventeen years later, he comes back with a new wife to bring daughter (Hilda Koronel) to the US. Anita's range of expression that climaxes in scenes when her American 'boyfriend' arrives and is wonderfully controlled in other dramatic scenes is alone worth the price of admission. Truly admirable.

Interestingly, Hilda Koronel and I think Anita as well are mestizas of (Caucasian) American ancestry, so that provides an added layer of interest to this story and their portrayal, as when Hilda's character shows disdain for her neighbors and their lives in Manila.

The third segment tells the story of a dutiful daughter (Lolita Rodriguez) whose whole life has revolved around her invalid, dominating mother (Mary Walter) in an imposing old Spanish house. It's a quiet drama that comes to a head when family secrets are revealed in a series of encounters and confrontations.

The first drama is about a young man who is sent to a drug rehab program,the different characters he encounters there, and the controversial techniques employed to get them 'clean' and ready to go back to society. It stars Jay Ilagan and introduces Bembol Roco. Interestingly, this segment, which includes a lot of screaming and overt scenes of conflict, is the least gripping of the three stories as the switches in emotions of the characters (particularly those of the therapy leader) are less convincing.