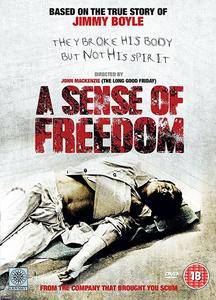 The true account of the Scottish criminal who spent a decade in and out of British prisons is the subject of this film produced by George Harrison's company, Hand Made Films. Jimmy Boyle's life story is captivating - following his turbulent years in and out of captivity, until in later life he married a psychiatrist and became involved in rehabilitating convicts.

Peter McDougall, British televisions most unfllinching writer, skilfully avoids making this a message-movie or an adaptation in a traditional sense. It is partly fictionalised, as it is not a story about criminality, it is about Boyle, a man with a will of iron who defies all society's attempts to dispose of him, and eventually reforms through compliance not defiance. David Hayman is very convincing and there's a wonderful cameo from Hector Nichol as a gatecrasher at a party. The violence is noticeably a long time coming. McDougall never needs to throw as many shocks in as possible, but brings in whatever is needed when it is needed. The icing on the cake is Frankie Miller's score and John McKenzie again showing he can film violence more truthfully than any other director. Wonderfully honest for STV, the emotion reaches more grim levels than McDougall's previous BBC works. Hayman plays the death of his mother and his contemplation of suicide beautifully, but most impressive is his curled up, wounded animal figure on the cell floor saying his name over and over again. This is the way to make a television film.