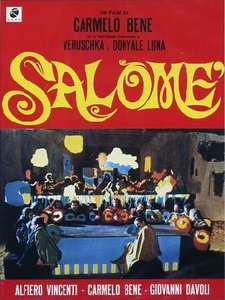 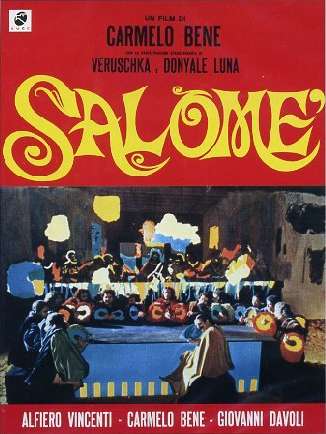 Salomè (Donyale Luna), the whorish daughter of Herod (Carmelo Bene), is lusted after by her depraved stepfather, King Tetrac. When her attempted seduction of the visiting John The Baptist fails, she agrees to satisfy her stepfather's perverted whims through the infamous dance of the seven veils, and in reaction to that, demands that Tetrac do her bidding and murder John The Baptist and present her his severed head.

There have been many films of the play "Salome", but none of them are anything like Carmelo Bene's version. The film is so bright, colorful and strange; it will make your head spin. The intro of the film contains a cartoon camel jumping through a loop, women getting spanked with feather paddles, a man slicing a watermelon with a machete and a women with beaded jewelry emerging from the water. Unfortunately, the only copy I could find didn't have subtitles. I really didn't need to understand the dialog to enjoy the strange and weird images. It's as if someone filmed Fellini Satyricon on a fixed budget, cut it into pieces, rearranged it and laced it with LSD style editing. That's why it is so darn entertaining. I first learned about Italian director Carmelo Bene from the book "Film as a Subversive Art" by Amos Vogel. This book changed the way I view films. I go out of my way to find surreal films like "Salome". It is strange, experimental and quite an experience. Don't watch this film on drugs, because the film is a drug in itself. A startling head trip of a film.
IMDB Reviewer