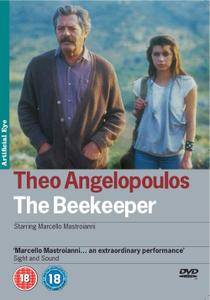 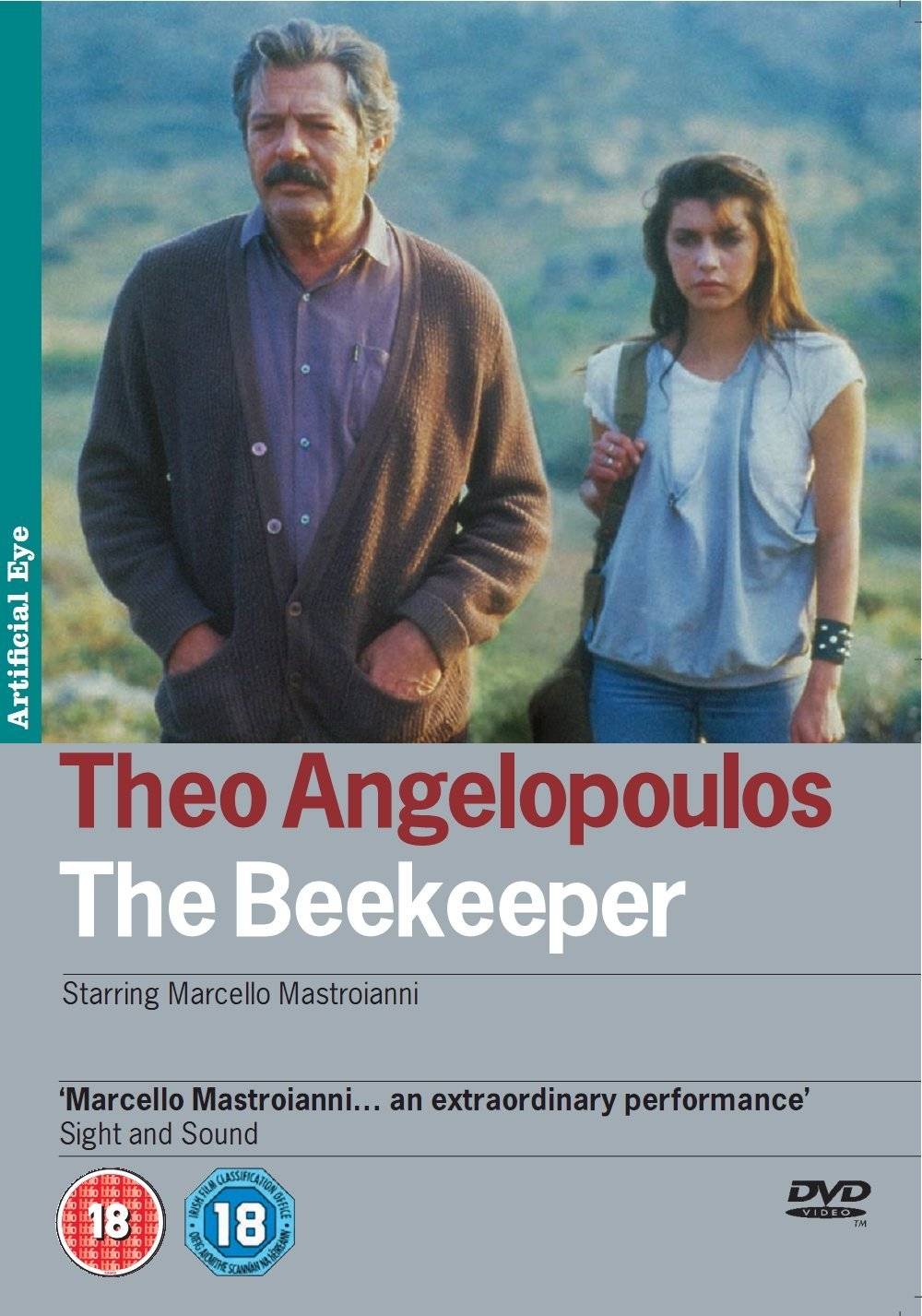 O Melissokomos / The Beekeeper (1986)
DVDRip | MKV | 718 x 576 | AVC @ 2000 Kbps | 117 min | 1.82 Gb
Audio: Greek AC3 2.0 @ 224 Kbps | Subs: English (Embedded)
Genre: Drama | Greece
Spiros retires as a schoolteacher, his daughter is married, and he starts his annual journey with his bees to get honey from different areas. In his truck he finds a young girl who has just been abandoned and has no roots. Spiros lets her follow for a day. Seeing her difficulty in getting further hitch-hiking, he takes her back. They will meet and part several times. Later she will say that Spiros is the only one who has ever been kind to her.

But his emotions are so restrained that he cannot show anything until a volcanic eruption breaks through. He does not seek serious contact until the eruption makes him drive the car right through the glass wall of the café in which the girl is sitting. She immediately follows him. But after this criminal event they can no longer live at hotels. From the beginning she was willing to sleep with him. But when he finally kisses her, her justified reaction is to repeat &quot;Not in this way!&quot; A friend had a shut down cinema where they could sleep. Endlessly she goes around starch naked. Fully clothed he is smoking and completely ignores her. What finally happens is almost a rape. The girl leaves him afterwards. When he realises what he has lost, he overturns all beehives and the bees kill him.

The Beekeeper opens to a static shot of an extended dinner table festively covered with a white tablecloth and ornamented with rose petals that is sitting empty at the center of the courtyard in the rain, as the sound of Spyros' (Marcello Mastroianni) affectionate voice is heard recounting to his young daughter the natural selection process of bees that culminates in the majestic queen's dance. The guests have retreated indoors for what is revealed to be the wedding reception of Spyros' daughter - now a grown woman - in the family home. From the onset, the middle-aged schoolteacher's profound disconnection is immediately palpable as he shares a prolonged, uncomfortable silence with his wife (Jenny Roussea) while picking up shards of broken glass from an overturned tray of wine glasses. Dispirited by his inevitable separation from his beloved daughter, Spyros separates from his wife and embarks on his forefathers' traditional vocation of apiculture. Traveling southward with his bees on an instinctual springtime migration, Spyros encounters a young hitchhiker (Nadia Mourouzi) who, abandoned on a rural truck stop, insinuates herself on the resigned and acquiescent Spyros through intermittent points on his indeterminate journey. Estranged from an unfamiliar modern world where his generation has become a historically incidental relic, Spyros attempts to reconnect with humanity through the promiscuous and rootless young woman and, in the process, retreats further into the solitude of his dying avocation.

The Beekeeper is a haunting, compassionate, and profoundly melancholic portrait of isolation, dislocation, estrangement, and obsolescence. Using episodically contrasting imagery of union and separation, Theo Angelopoulos provides a sustained visual metaphor for the film's pervasive themes of fracture and disintegration: the assembly of family members for a formal wedding photograph that is followed by their individual departure from the family home, first by the daughter and her new husband, then the wife and son, and finally, Spyros; the opening sequence of the extended dinner table that is representationally shown in fragmented form through repeated shots of empty bistro tables as Spyros re-encounters the hitchhiker; the image of shattered wine glasses that is repeated in Spyros' impulsive crashing of his vehicle into a restaurant plate window in order to reunite with the young woman; the organized matrix of apiculture boxes during transit that is subsequently shown as individual containers randomly scattered along a hillside open field (that provides visual continuity with the overlooking houses of a distant village). Achieving a visual dichotomy that is both patternistic and deconstructive, the film serves as an indelible chronicle of the destruction of tradition and family, the cultural erosion of contemporary Greek society, and the desolation of the human soul.

In the same year, Theo Angelopoulos released his strangest and perhaps weakest film, The Beekeeper (O Melissokomos), with Marcello Mastroianni, Serge Regiani, and the young Nadia Mourouzi. This film too is about existential loneliness, ideological disenchantment, and psychological loss. Spyros, a teacher, takes his honey bees around Greece “following the pathways of Spring.” On his travels, he meets a young girl who rekindles in him his older self and the lost dreams of his youth. In despair, he will let himself be killed by the stings of his bees while tapping on the ground the old coded messages from his imprisonment after the Civil War.

It was a strange film, a somewhat awkward attempt to explore psycho- logical trauma and loss that leaves everything in abeyance. The script was rather weak, and Marcello Mastrogianni was not really there. On the other hand, it inaugurated a mesmerizing dialogue between the camera and the landscape, between photography and the natural elements. The long, slow takes seem to capture natural phenomena as monumental events in a succession of still photographs, as though the camera wants to stop the flow of time.

Great cinematography by Yorgos Arvanitis and ecstatic music by Eleni Karaindrou enhance the feeling of emptiness and absence that permeates the story. Angelopoulos himself saw this film as a direct reference to the missed “appointment with history” that Greek society was experiencing at the time: it was a missed opportunity that led to what he considered “the silence of history.” Because of this silence, he claimed: . . . we are all trying to find answers by digging into ourselves, for it is terribly difficult to live in silence. When there is no historical development, one is tempted to focus on oneself, in the context of this crisis that has interrupted historical continuity. For our generation, having taken an active part in keeping this continuity alive, this is very sad, the kind of disappointment that is very difficult to express.” The film falters in construction and characterization as its auteur oscillates between an existentialist cinema and one of collective destiny. It is a transitional film, linking his previous work to the next—Landscape in the Mist (1989)—and creating the iconography of the new stories that were to occupy him after such disenchantment with politics.

a : Your previous film, Voyage to Cythera, clearly indicated your disenchant­ ment with the world of politics and, if it did not spell out the death of ideologies in so many words, it certainly provided a point of view on these matters, that was different from all your previous films. Now, in The Beekeeper the only reference to politics is in the meeting between Mastroianni and Reggiani, when they talk about old comrades and about missing "their appointment with history." The rest of the film concentrates on the fate and personal problems of one single individual.
A : Please keep in mind we're talking about a man who is fifty-five years old and carries half a century of history on his back. He is no innocent, he feels the weight of the past on his shoulders. He may mention his former hopes of changing the world, while reminiscing about things gone by in the com­pany of old friends, but this context of the film is clear from the very begin­ning. He has lived through forty years of intense history, a period of major changes and importance for Greece and the rest of the world. War, repres­sion, but also hope. He is a man of our time, with all this past behind him, facing a young girl who has no memory at all and who calls him "Mister-I­ remember." It is the conflict between memory and non-memory. I was often asked: "Why does he commit suicide?" I do not believe he commits suicide. His is an act of despair, but while he is doing it, as he is turning over the beehive, he tries to establish some kind of communication, hitting the ground with his hand the way prisoners do in jail. For he is a prisoner of certain circumstances, and he tries to communicate with the past. But we have to look for something else. We are now living a major historical mo­ment, waiting for the world to change but having no idea how and when this is going to happen. In any case, it is clear that something has to happen to pull us out of the state we are in. There have always been big, wide gaps in the history of mankind, moments of profound silence. We are living through such a period and this silence can induce terror.

a : In your last two films, Voyage to Cythera and The Beekeeper, you call your hero Spyros. Does it have a particular significance in your eyes?
A : Spyros was the name of my father. For me, it represents his entire genera­tion. In the context of the films it does not have any significance, but I am very much attached to it. The other thing is that since every one of my films carries the seed for the next one, this is one of the ties between Voyage to Cythera and The Beekeeper. The choice of the name may also reflect a personal problem-it is quite possible that I am not capable of telling anyone else's stories but my own. Maybe I am simply limited to my own experience, my traumas and my hopes, my own personal growth and evolution. This is why I believe that my next film will come out of The Beekeeper. 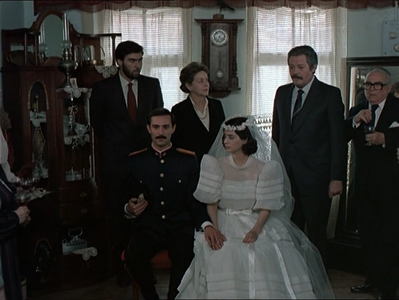 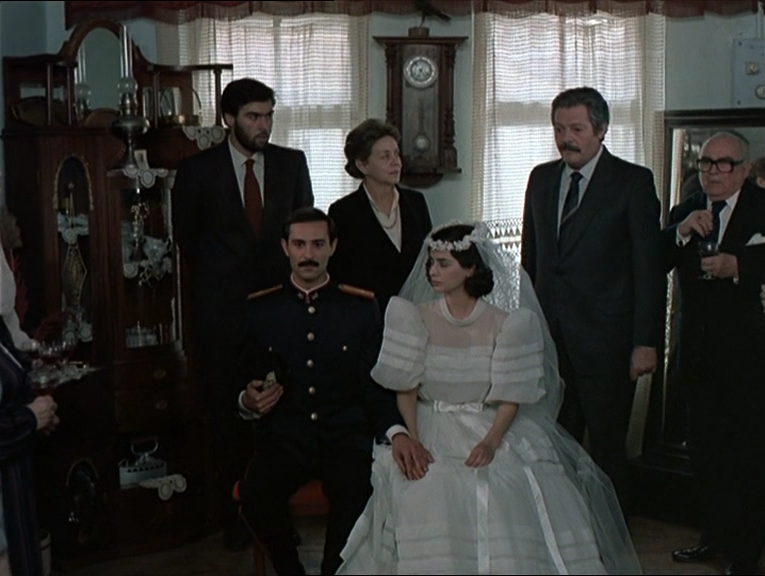 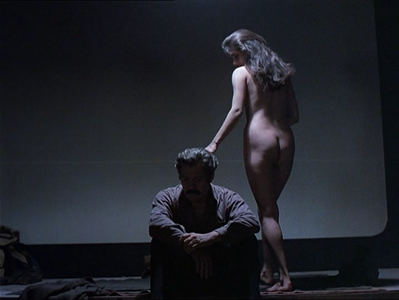 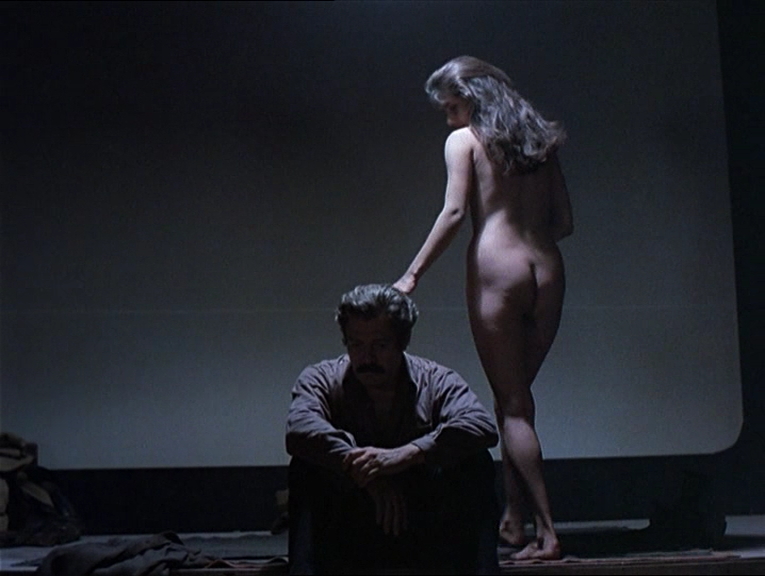 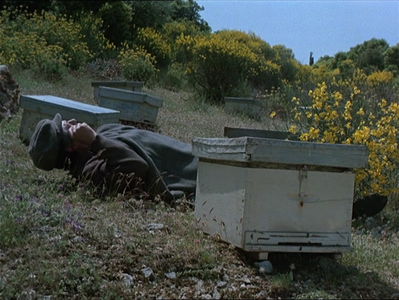 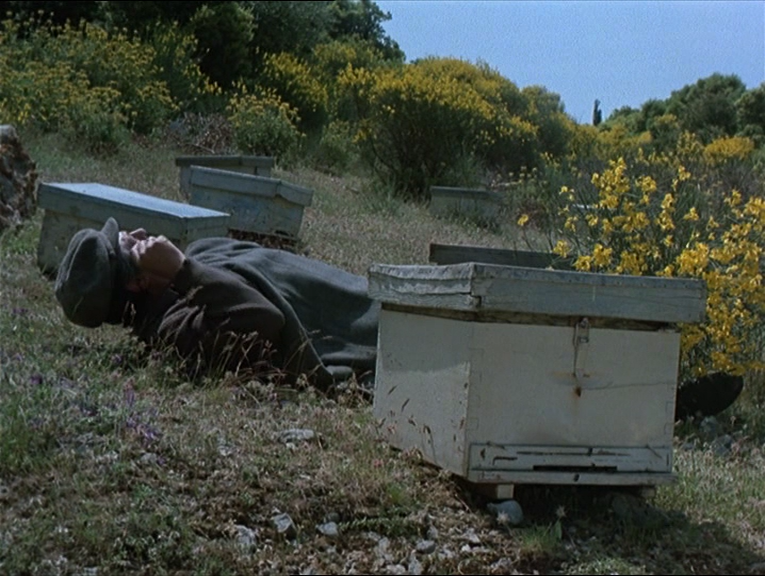 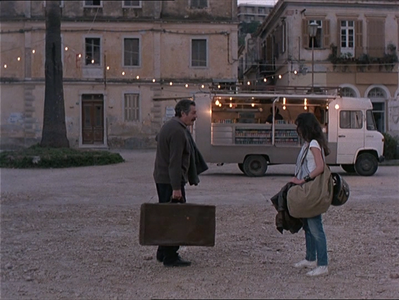 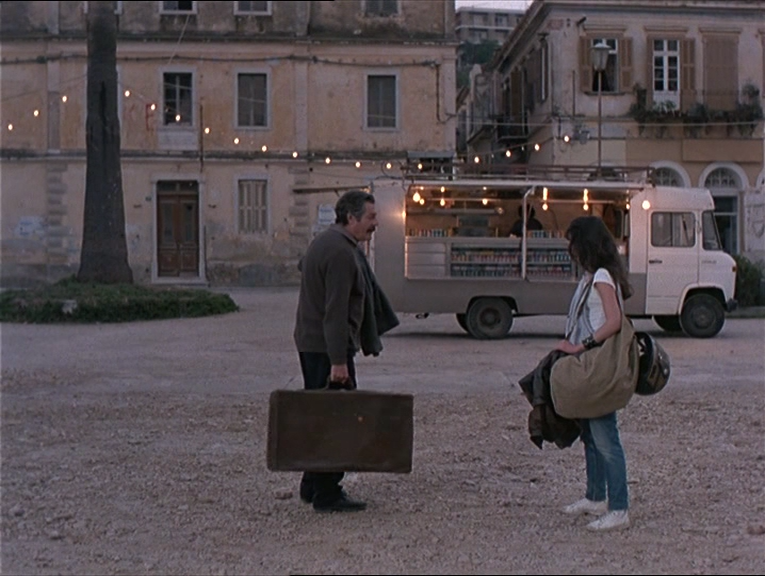 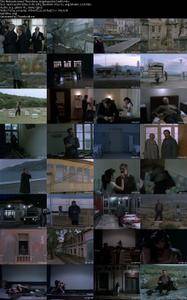 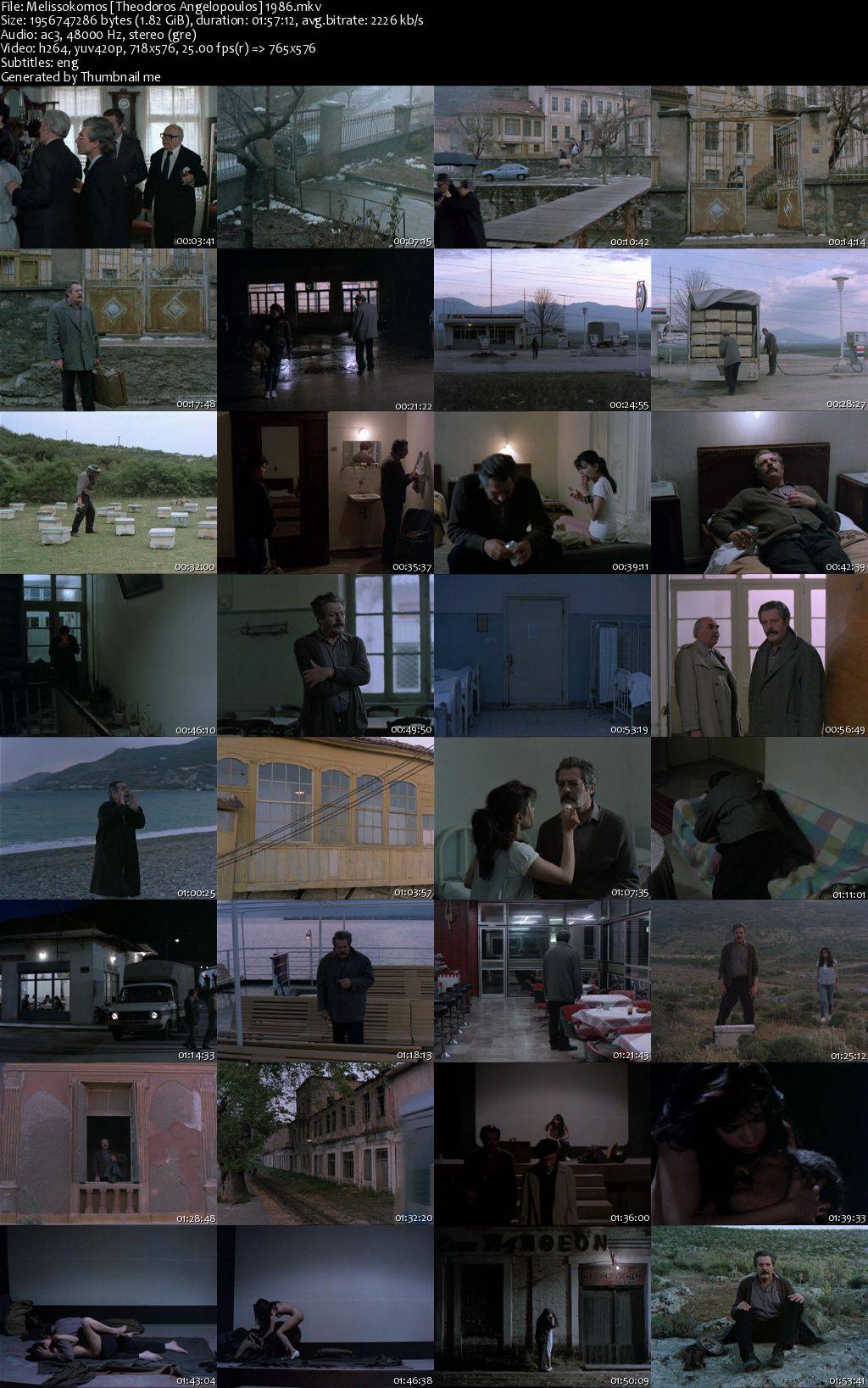