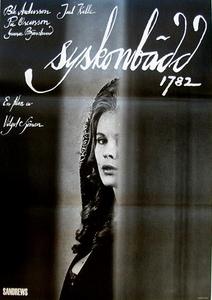 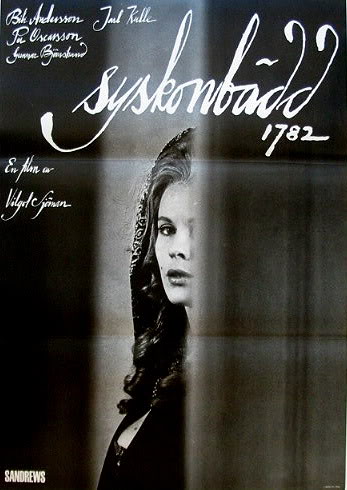 Set in Sweden in 1782. Jacob, a young nobleman (Per Oscarsson) returns from France to his home and cherished sister Charlotte (Bibi Andersson) who is engaged to Baron Alsmeden (Jarl Kulle). The siblings close relationship becomes incestuous and with fear that the disclosure of Charlotte's pregnancy will make society view them as libertines, the lovers ultimately choose to part. Jacob decides to leave the country and Charlotte is left to marry the Baron, but it is too late to prevent the final tragedy.

In the 1960s cinema was an important source of sexual education for Latin American teenagers (and I guess anywhere else too), no matter how incomplete the information was, since the motion pictures with erotic elements had not been made with educational purposes. There were the nudie films, the movies "with a medical warning", or boring "scientific" documentaries, which all lacked a sense of life, fun or sexual urge; and of course, there were the pornographic shorts which did not circulate freely. Priests in my school were constantly warning us students what movies we should not see. They could not care less about Argentinean soft-porno star Isabel Sarli, whose movies were mainly pictorials, with a big centerfold of La Coca's large bosom; but when it came to films as Ingmar Bergman's "The Silence", red lights would immediately flash in my classroom. "Syskonbädd 1782" did not catch their attention. The original title means something like "Bed Siblings", but since it was euphemistically retitled "The Fire" in Panama (in the United Kingdom it was given a more obvious title: "My Sister My Love"), the priests ignored its subject was an incestuous love affair in Sweden, between a man and his sister, who was about to marry a noble man, during the eighteenth century. I went to see it and it caused me a little commotion. I still remember it as a very good film, treating its subject with intelligence, showing how moral rules affected the relationship (with more dramatic results for the sister), striking black-and-white cinematography, and great performances by Bibi Andersson and Per Oscarsson. It was also one of the first movies to show male pubic hair, which announced what director Vilgot Sjöman would do next: the remarkable diptych "I Am Curious: Yellow" and "I Am Curious: Blue." I saw these two films for the first time in 2005 and was very well impressed. "Syskonbädd 1782" and the two "I Am Curious" films have aged very well, and place Sjöman among the best European filmmakers of that decade. I recommend them highly.