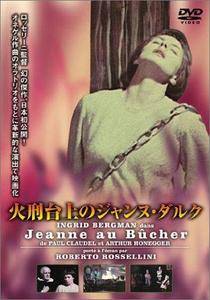 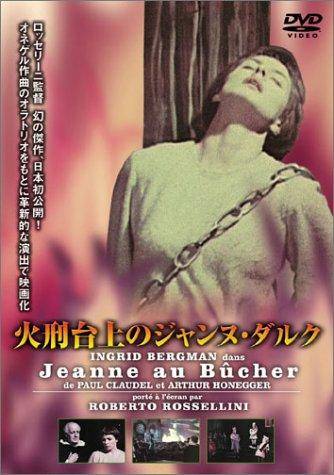 Giovanna d’Arco al rogo (English: Joan of Arc at the Stake) is a 1954 Italian film directed by Roberto Rossellini and starring his wife Ingrid Bergman, which shows a live performance on December 1953 at the San Carlo Theatre in Naples. The film takes place mostly in a surrealistic fantasy around the time of the execution of Joan of Arc. Joan of Arc, played by Ingrid Bergman, is being burned alive for heresy. In a kind of dream state, she departs from her body and begins to look back upon her life. She begins this journey in a depressed and demoralized state. However, a priest appears to help guide her. First, he shows her those that accused her in the guise of animal characters, in order to show her their true nature. Then, he shows her the good that she has performed for people. In the end, she is proud of what she has done and is ready to face the flames