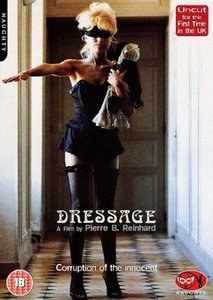 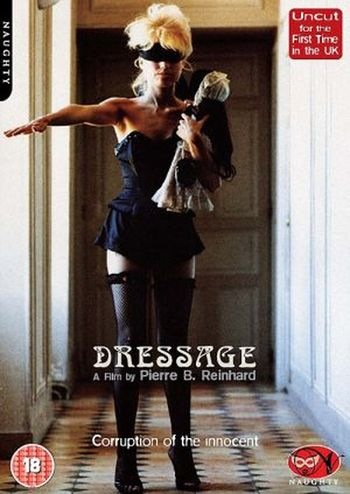 At a decadent 1930's party, two very sexy and utterly shameless young women, Nathalie (Veronique Catansaro) and Eiliane (Cornelia Wilms) make a bet with a rich and handsome young Baron to corrupt two innocent teenagers in order to ruin their families' reputations. The prize on offer is marriage to the wealthy Baron.

The innocent and beautiful Nathalie, the illegitimate child of an aristocrat, seeks revenge on her father, Leroy-Murville (Henri-Jacques Huet). She is hired as the private teacher of her half-sister, sexy Sophie (Katya Strambi), and revenge takes shape using the most depraved teaching methods.

Previously only available in a heavily censored version, DRESSAGE can finally be appreciated in its fully uncut and sexual glory for the first time.

The British genre press received this film with hostility when it came out on video in the mid 1990s. Why? This is undoubtedly an exploitation film, more precisely: soft pornography, but it does not fit easily into the usual subgenre classification Eurotrash fans come to expect. Although it is a sex comedy, it isn't one of those silly dim-witted sex comedies so frequently made in Italy, England and Germany in the 1970s. In particular, the film takes the eroticism more seriously than comedies normally do and shows even signs of pretentiousness [you can tell it is a French production], and it is particularly the latter aspect British genre critics seem to find hard to accept. Similarly, there are themes of revenge, humiliation, voyeurism, bondage - but these are treated in a semi-comical way, and the distinctly misogynist appetites harboured by the unpleasanter fans of sexploitation cinema remain unsatisfied.