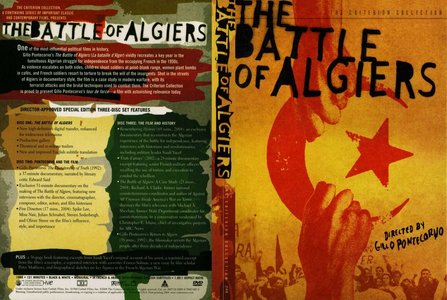 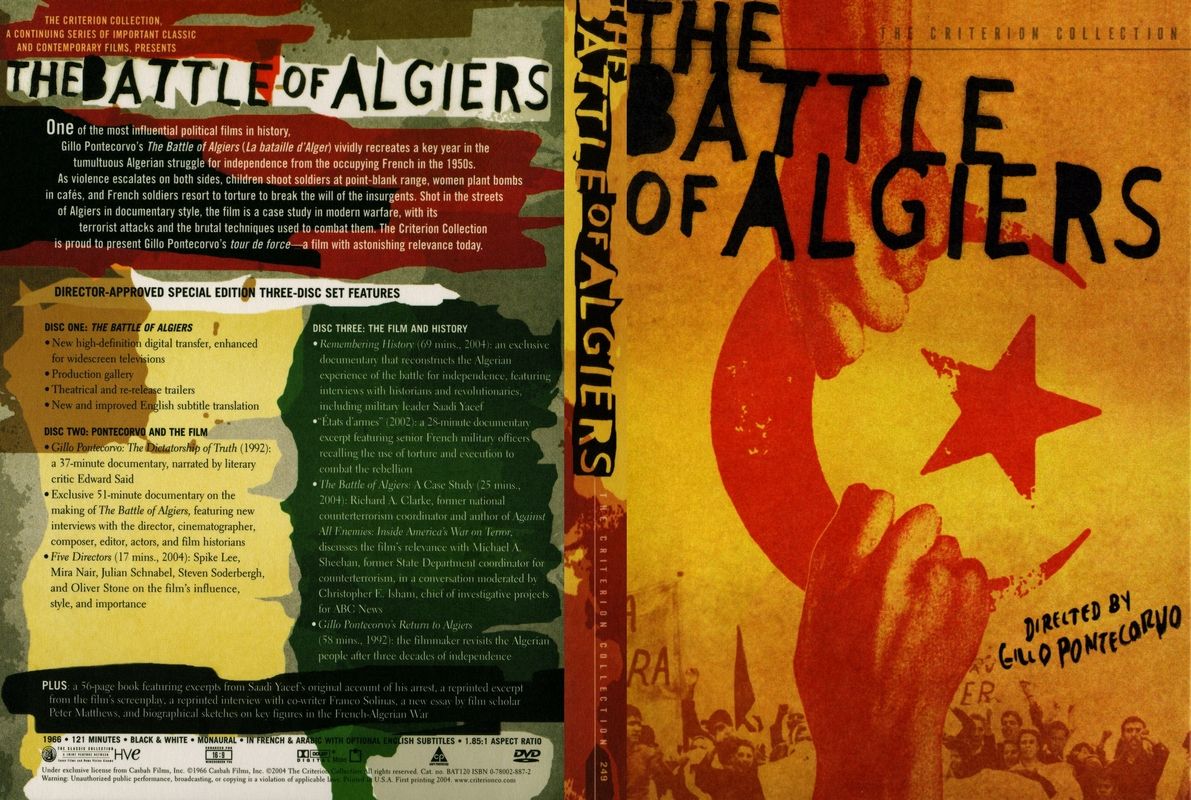 One of the most influential political films in history, The Battle of Algiers, by Gillo Pontecorvo, vividly re-creates a key year in the tumultuous Algerian struggle for independence from the occupying French in the 1950s. As violence escalates on both sides, children shoot soldiers at point-blank range, women plant bombs in cafés, and French soldiers resort to torture to break the will of the insurgents. Shot on the streets of Algiers in documentary style, the film is a case study in modern warfare, with its terrorist attacks and the brutal techniques used to combat them. Pontecorvo’s tour de force has astonishing relevance today.

This highly political film about the Algerian struggle for independence from France took "Best Film" honors at the 1966 Venice Film Festival. The bulk of the film is shot in flashback, presented as the memories of Ali (Brahim Haggiag), a leading member of the Algerian Front de Liberation Nationale (FLN), when finally captured by the French in 1957. Three years earlier, Ali was a petty thief who joined the secretive organization in order to help rid the Casbah of vice associated with the colonial government. The film traces the rebels' struggle and the increasingly extreme measures taken by the French government to quell what soon becomes a nationwide revolt. After the flashback, Ali and the last of the FLN leaders are killed, and the film takes on a more general focus, leading to the declaration of Algerian independence in 1962. Director Gillo Pontecorvo's careful re-creation of a complicated guerrilla struggle presents a rather partisan view of some complex social and political issues, which got the film banned in France for many years. That should not come as a surprise, for La Battaglia di Algeri was subsidized by the Algerian government and – with the exception of Jean Martin and Tommaso Neri as French officers – the cast was entirely Algerian as well.
Robert Firsching, Rovi

An historian writing about the Algerian war against the French colonial authorities entitled his book "A Savage War of Peace". "The Battle of Algiers" provides many answers to that enigmatic title. It does not attempt to show us the entire war but centers on the city of Algiers. Even though you are told at the beginning that no documentary footage is used it is at times hard to believe as many of the images you see have a stark and often unsettling reality to them. Considering that this was a co production between Algeria and Italy the film is remarkable in that it does not turn itself a political tirade by taking sides. Instead the camera is a sort of neutral observer allowing us to witness events that spiraled from individual demonstrations to a full scale war of savage intensity. French officers who fought the Nazis a few years before degenerated into the mode of their former enemy while Algerians had no problems exploding bombs that would kill their own people. The camera shows no heros or villains but humanity in its darkest forms. This is a powerful film with superb direction and cinematography. It truly is one of a kind and once seen will never be forgotten.
IMDB Reviewer 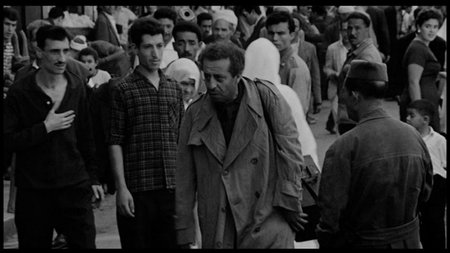 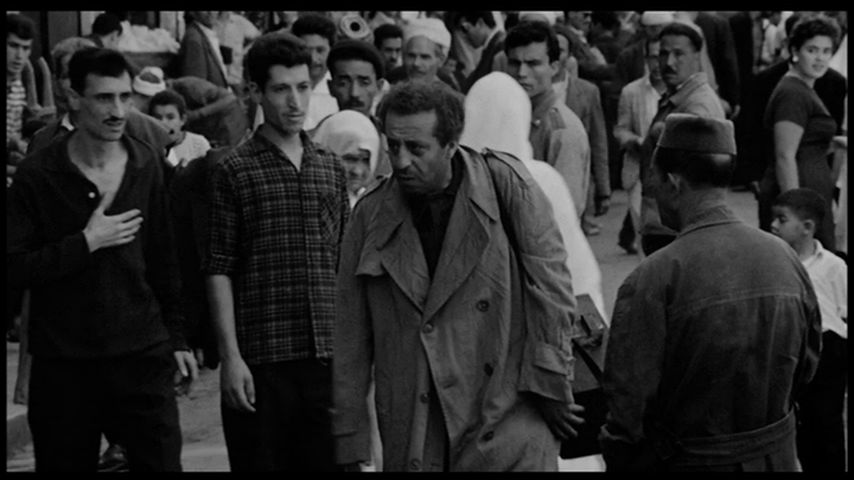 The principal characteristic of Gillo Pontecorvo's La Battaglia di Algeri (The Battle of Algiers) is its ferocious authenticity. It is a monument of neo-realism in the best tradition of Vittorio De Sica (Shoeshine, Bicycle Thieves) and Roberto Rossellini (Rome, Open City). La Battaglia di Algeri is made with such astonishing, feral realism that it effectively blurs the line between documentary and fiction filmmaking. Using professional and non-professional actors, and, unbelievably, no newsreel footage, Pontecorvo draws out the passion and story of the Algerian people trying to free themselves from French rule in the mid-Fifties. There are any number of striking, memorable sequences, and the film became influential for the revolutionary mentality which hit the United States around the same time (it was apparently a favorite film of The Black Panthers). A stylistic connection can also be made between one of the most important American films of the 1960s, Bonnie and Clyde, and this movie, which preceded it by a year.
Brendon Hanley, Rovi 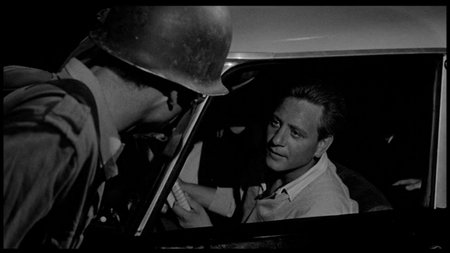 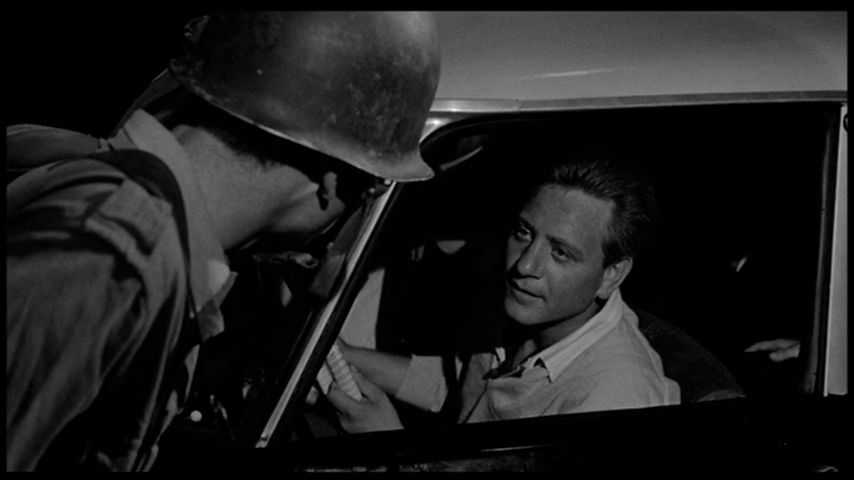 Nearly four decades ago, Italian filmmaker Gillo Pontecorvo's The Battle of Algiers was considered one of the most provocative, politically incendiary movies of its time.The Black Panther Party used it as a training film, the French government banned it, and lovers of cinema revered it as a masterpiece. Last year, in 2003, the Pentagon hosted a special screening of the film, in hopes it would shed valuable light on how to deal with rebel forces in Iraq. Now The Battle of Algiers is back in a beautifully packaged addition to the Criterion Collection, where it can be studied, appreciated and, no doubt, argued about. 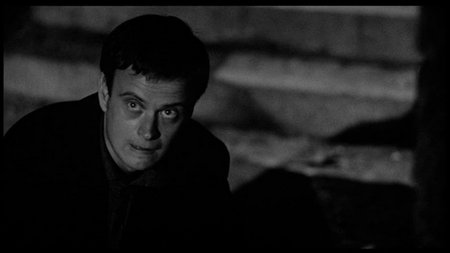 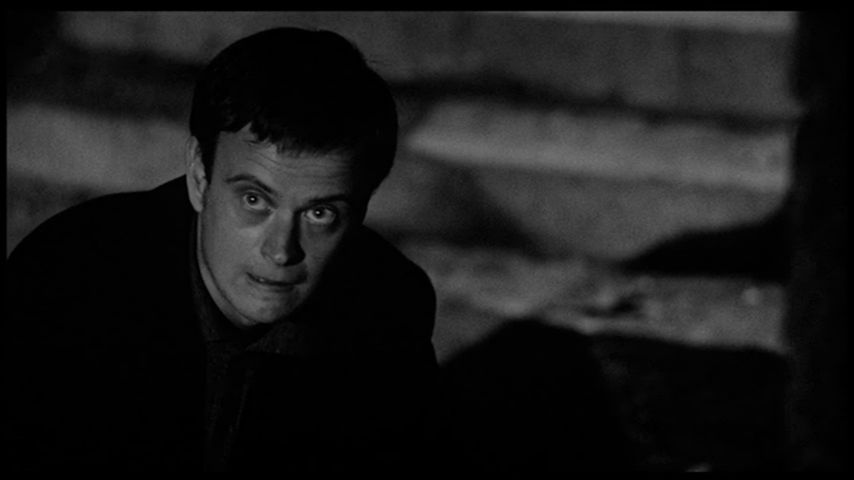 Chronicling the 1954-1962 revolution that would eventually lead to the end of French colonial rule in Algeria, The Battle of Algiers is a bleak, uncompromising portrait of terrorist warfare and a war on terror.The film starts with French soldiers interrogating a captured Algerian prisoner. The man's will has been broken, and his weary, tear-streaked face alludes to the torture he has endured. The French soldiers, led by the charismatic Col. Mathieu (Jean Martin), assure their prisoner he has done the right thing. But the emotionally dead gaze in the man's eyes says something to the contrary. As Mathieu leads his men on a raid to find rebel leader Ali La Pointe (Brahim Haggiag), the magnitude of the betrayal that occurred moments before the camera entered the interrogation room becomes painfully clear. 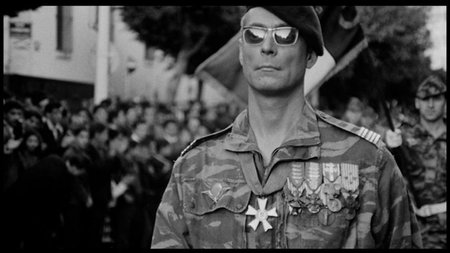 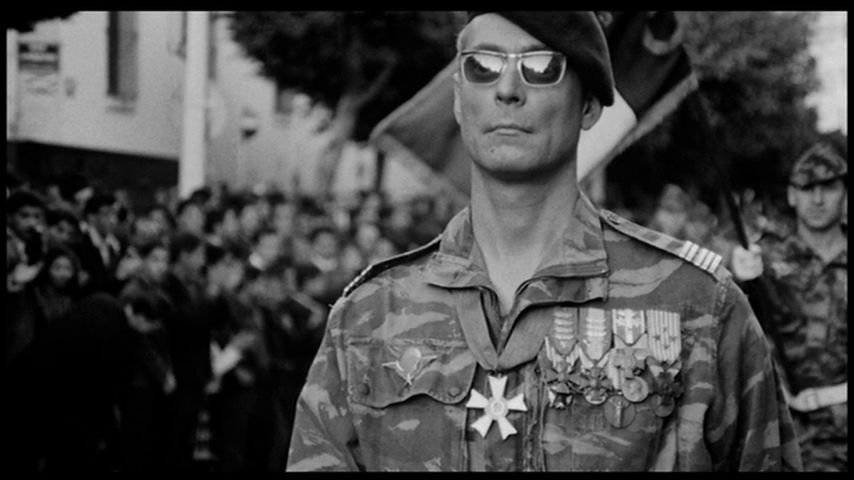 Hiding behind a false wall in Algiers' Muslim Casbah, Ali and his three companions in the Algerian National Liberation Front, or FLN, await their fate. As Mathieu and his men rampage through the apartment concealing them, Ali and his fellow rebels—which include a woman and a young boy—pray for an escape that will never come. As the moment of their impending capture—or death—comes ever closer, Ali reflects on the course of his life leading up to this point. 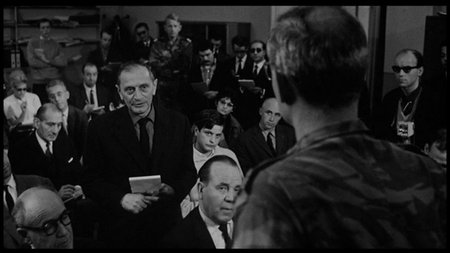 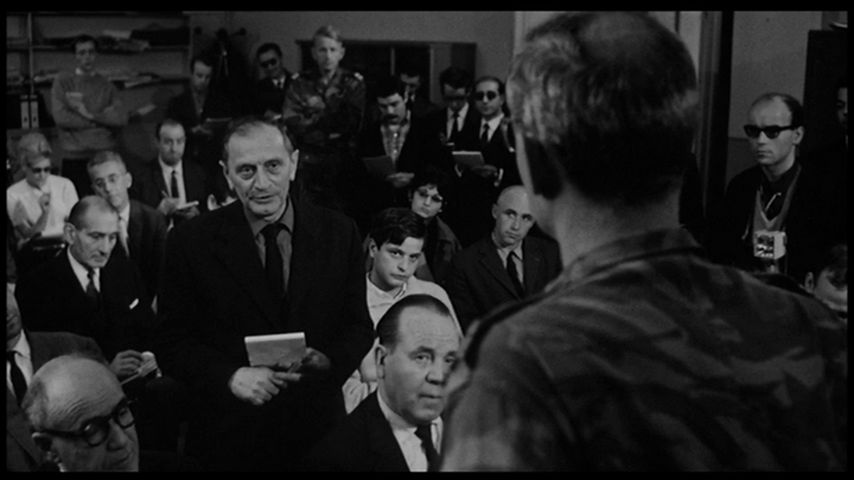 A communist who fought against the fascists during World War II and a student of Italian neo-realism, Pontecorvo brought both an artistic aesthetic and a political ideology to The Battle of Algiers. Shot in stark black-and-white, Pontecorvo's film bears an uncanny resemblance to a documentary. During its initial release in 1965, the film's distributor added a disclaimer: "Not one foot of newsreel or documentary film has been used." 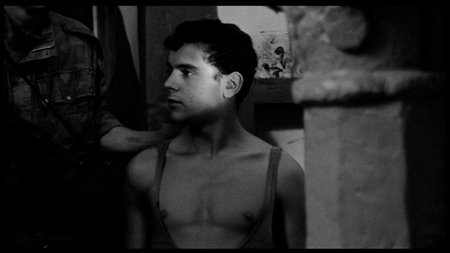 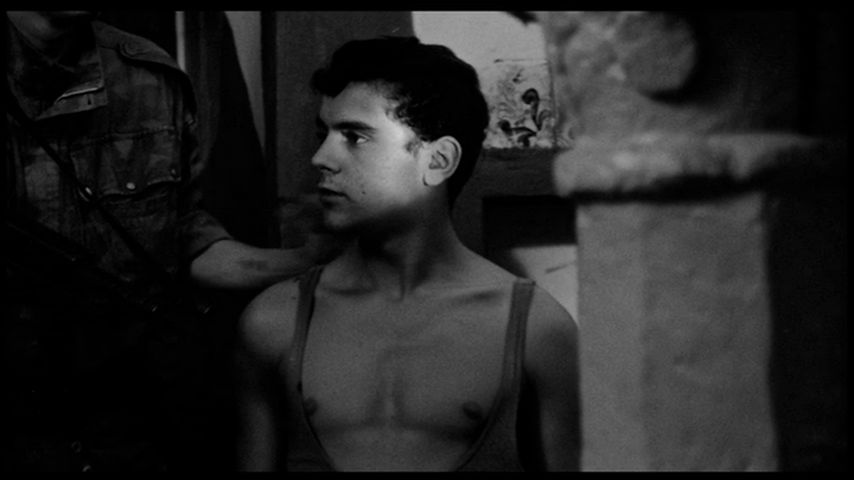 Such a statement might seem merely a hyperbolic marketing stunt, until you see the gritty reality Pontecorvo portrays. From the frenzied panic that follows a series of terrorist bombings to the throngs of Muslim dissidents who take to the streets to oppose French rule, much of The Battle of Algiers appears composed of actual riot footage captured just as the shit was hitting the fan. Pontecorvo made a film of historical propaganda by working closely with the newly liberated Algerian government, as well as Saadi Yacef, the former leader of the FLN, who basically plays himself in the movie. But his roots in neorealism kept the director from crafting a film that paints its characters in absolutes. Instead, Pontecorvo and co-writer Franco Solinas create a world of moral ambiguity, in which the heroes are terrorists who resort to killing innocent civilians to advance their cause, and the villains are French soldiers who also resort to killing innocents to achieve their goals. No one is entirely good or bad, both sides are right and wrong. And while the film and the filmmaker clearly take the side of the FLN, Pontecorvo is careful to give the The Battle of Algiers enough sense of balance that it endure more like a historical document, and less like biased propaganda. 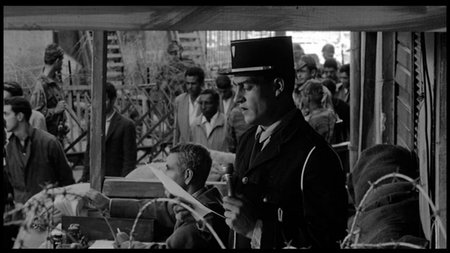 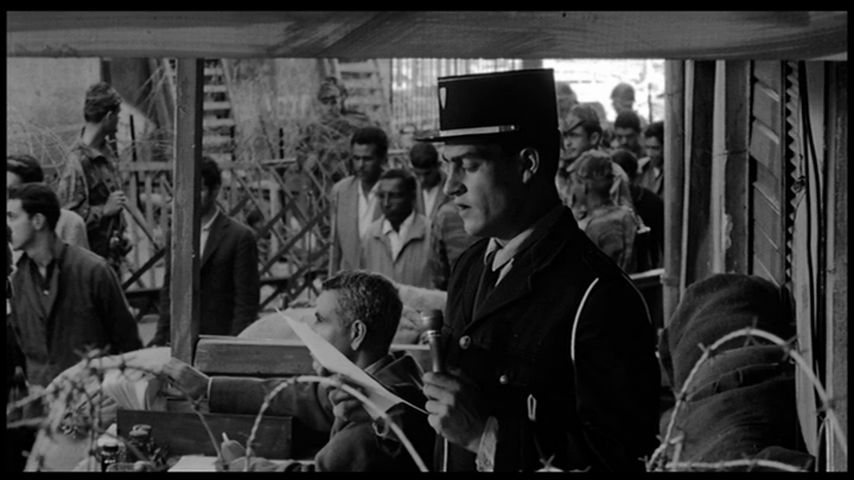 With the current situation in Iraq, and the Pentagon's screening of The Battle of Algiers, much has been made of the film's relevance to current events. Perhaps the most significant theme in that discussion is why the French refused to support military action in Iraq. What they learned during the Algerian conflict, and what is so brilliantly conveyed in this film, is that winning battles is not the same as winning a war.

To that end, The Battle of Algiers does not serve either as a great training film for political revolutionaries or as a helpful tool for understanding how to combat terrorists. Instead, it is a brilliant piece of cinema that offers a cautionary tale about the high cost of violence as a means to an end.
David Walker, The Battle of Algiers - Criterion Collection - DVDtalk 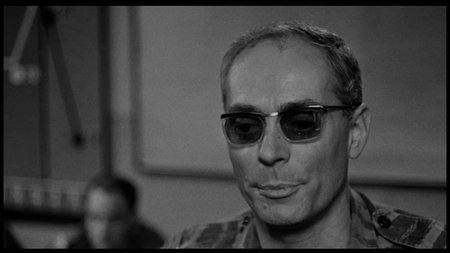 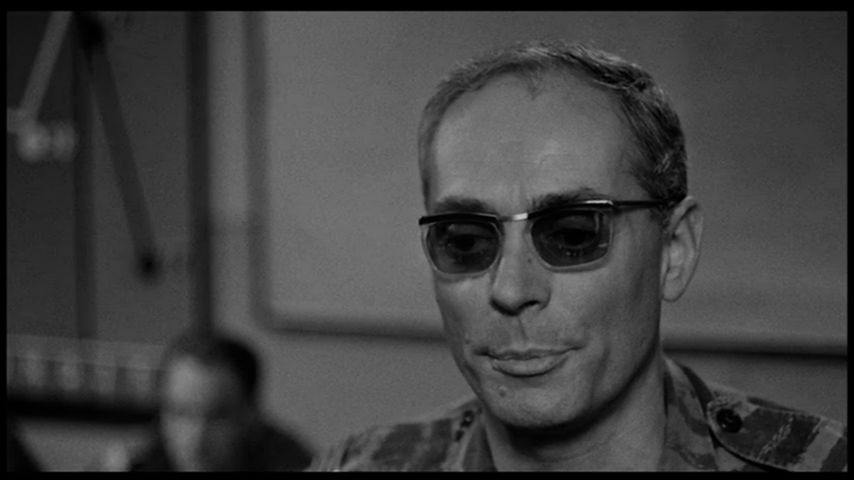 DISC 2: PONTECORVO AND THE FILM
– The Making of The Battle of Algiers: an exclusive new documentary created for this release guided by Pontecorvo biographer Irene Bignardi and featuring interviews with the director himself, cinematographer Marcello Gatti, composer Ennio Morricone, editor Mario Morra, actors Jean Martin and Saadi Yacef, and film critic Tullio Kezich (51 min)
– The Dictatorship of Truth: a 37-minute documentary narrated by Edward Said about the relationship between Pontecorvo’s politics and filmmaking style
– Five Directors: a discussion about the The Battle of Algiers influence, style, and importance featuring, Spike Lee, Mira Nair, Julian Schnabel, Steven Soderbergh, and Oliver Stone (17 min)

DISC 3: THE FILM AND HISTORY
– Remembering History: a new documentary featuring interviews with historians Alistair Horne, Hugh Roberts and Benjamin Stora, former FLN members Zohra Drif-Bitat, Mohammed Harbi and Saadi Yacef, and writer and torture victim, Henri Alleg (The Question) (68 min)
– “Etats d’Armes” - a 30-minute excerpt from Patrick Rotman’s 3-part documentary, L’Ennemi Intime, which focuses on the horror of the French-Algerian War. It features interviews with various members of the French military during the French-Algerian War, including General Jacques Massu, General Roger Trinquier, General Paul Aussaresses, and others
– How to Win the Battle But Lose the War of Ideas: a conversation about the contemporary relevance of The Battle of Algiers between former National Coordinator for Security and Counterterrorism and author of Against All Enemies: Inside America’s War on Terror, Richard A. Clarke, former State Department Coordinator for Counterterrorism, Michael A. Sheehan, and Chief of Investigative Projects for ABC News, Christopher E. Isham (25 min)
– Return to Algiers (1992, 55 minutes): three decades following its emergence as a nation, director Gillo Pontecorvo and his son return to Algeria to talk with its people about independence
– A booklet featuring a new essay by film scholar Peter Matthews, excerpts from Algeria’s National Liberation Front leader Saadi Yacef’s original account of his arrest, excerpts from the film’s screenplay, a reprinted interview with cowriter Franco Solinas, and biographical sketches of key figures in the French-Algerian War