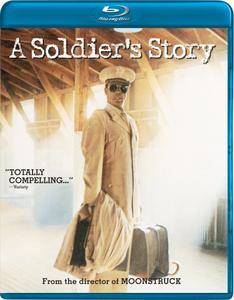 A Soldier's Story (1984)
BRRip 720p | MKV | 1280 x 694 | x264 @ 2000 Kbps | 1h 40mn | 1,73 Gb
Audio: English AC3 2.0 @ 448 Kbps | Subtitles: English (embedded)
Genre: Crime, Drama, Mystery | Director: Norman Jewison
A black Army investigator (Howard E. Rollins Jr.) travels to a remote military base in the heart of the Louisiana backwoods to look into the mysterious murder of a black sergeant toward the tail end of World War II. Once he arrives, the investigator discovers an Army regiment and an entire community that, despite the beginnings of integration, is still torn apart by race and segregation. He soon learns that on this base, trust is sparse and secrets are a currency all their own.